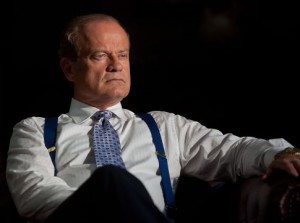 There’s something about the gifted asshole that we love. A mediocre or just an average asshole would be impossible as a protagonist. But make him sharp as a razor and give him some charm, and we’re eating from his hand.

I’ve been watching Boss, the 2011 TV show about a fictional mayor of Chicago. Mayor Tom Kane has bought into the idea that he is the city, and sometimes he deems it necessary to rule it with an iron fist. His fist, however, only ever strikes in the shadows.

Appearance and politics becomes everything once he learns that he’s suffering from a neurological disease, one that will ultimately kill him. As long as he can cling to his throne, life is still in his grasp – and he becomes increasingly desperate to hang on. Not that he was ever in the game “for the people”, even if the thought helps to ease the guilt over his cutthroat political ambition.

The mayor believes that “people want to be led“, and perhaps our fascination for these bastard alpha males (like Mad Men’s Don Draper) suggest that there’s some truth to it. I know I’ve enjoyed every second of watching the show, and the biggest reason is Kelsey Grammer’s vibrant, fascinating and terrifying portrayal of Tom Kane.

Yes, Kane. It’s no coincidence that the mayor shares his name with the publishing tycoon of Citizen Kane. They overlap each other in ambition and in who they become.

The theme is clear from the show’s very first scene – where Kane is given his diagnosis and an estimate of how long he’s got left. He’s told that both his mental and physical faculties will wither until he finally expires. Whenever you’re cheering for him in the face of adversity, you still know that any victory is just a temporary pause on the downward spiral. Together with the fact that the protagonist is a democratic despot, watching Boss makes for an emotionally complex experience. One that I recommend.