Whenever a high quality open world game comes along, I try to play it. Of all the games I play, those are the ones that more convincingly than any other provide me with agency, with worlds that respond to my actions. They present coherent spaces that I can project myself into. Compared to many games of other genres, like the lame, static theatre of many corridor shooters, they’re violently engaging. 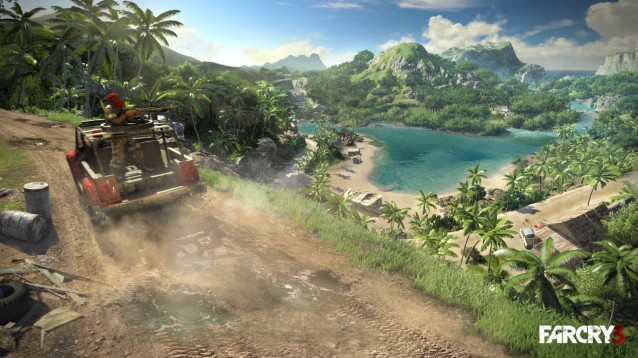 The last open world game I’ve been playing (and enjoying quite a lot so far) is Far Cry 3. It’s a well made and entertaining sandbox FPS focusing both on emergent and authorial storytelling, but it’s not without a few quirks and I have some thoughts I want to share about those. So here are a some of the things I’ve been up to on Rook Islands during my first hours of play.

I hunt! I stalk boar, deer, pigs and whatever else that is necessary for my survival. But it’s not for the meat. I don’t hunt them to satisfy my hunger. I’m after the pelts, their skin. To survive in the world of FC3 you need to craft wallets, backpacks, holsters, and more… The strange thing is that I loot assault rifles, old photographs, playing cards and all kinds of crap from the bodies of dead enemies, but for some reason I have to tear the skin of a pig and sew a wallet to increase the amount of money I can take with me.

Mechanically I do appreciate this, but they could have done a better job at integrating their crafting with the world they’ve built. The level of ludonarrative dissonance is surprising for an open world game 2012.

By the way, a small hint – the best weapon for hunting is any old car you find. They’re relatively silent and won’t spend your precious ammo. And it’s fun.

I fight! A big portion of your time in FC3 will likely be spent on taking outposts from pirates. When you’ve successfully defeated the pirates and your allies come to patrol the outpost, you gain access to its safe house. Inside is an automated store, full of weapons and ammo. A great reward from a mechanics perspective, but I keep wondering who I’m buying from? It must be the pirates’ store because the place was theirs a minute ago, but they’re all dead now – nothing but perforated, inanimate and soon to be despawned carcasses. Buying weapons from my dead arch enemies doesn’t make sense.

I climb! Rook Islands are littered with radio towers. Each is unique, and if you climb all the way to the top and hit a button you receive several rewards. First you get to see the camera swirl around the nearby area, highlighting local points of interest. Then it unlocks a free weapon in the weapon stores around the islands. The motivation behind the free weapons is that all the radio towers have a signal scrambler installed by the pirates, and the store owners have problems getting new shipments until the player destroys the scramblers. The free weapons, then, is a reward, a thank you from the gun store owners. And it’s a weak explanation that I just don’t buy. 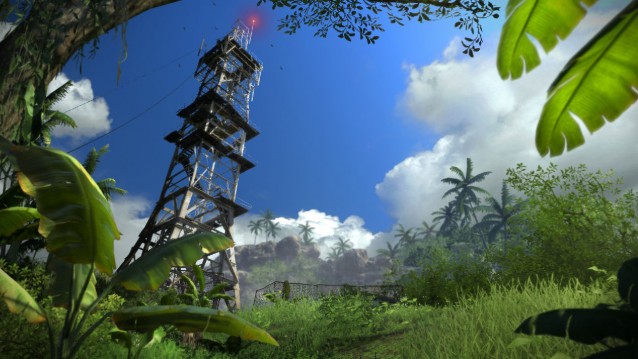 Why, when I skin an animal, do I watch the protagonist tear out its guts while leaving the fur unharmed? Why, when I pick fruits and flowers and herbs from all kinds of vegetation do I only get differently colored leaves? Far Cry 3 remains a fun sandbox with neat gameplay and interactivity, but some of the features running the sandbox feel like raw mechanics with a thin layer of hastily applied paint. Such a poor paint job makes it harder to sustain the suspension-of-belief that I crave.

It feels more like a game than a world. And I get the feeling that it was intentional. But why?